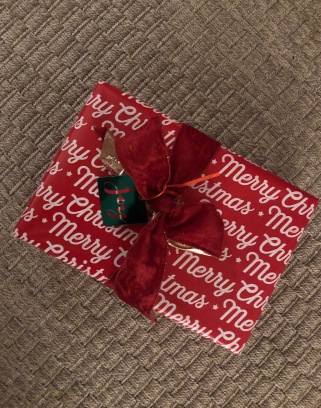 Is your Christmas preparation almost wrapped up, or is it still a work in progress?  After a marathon weekend of friends and family, I sat down Sunday evening by the fireplace to just take a moment…to pause and reflect on the people I love and that love us.  As I did, a verse from Luke 2; ‘there were shepherds living out in the fields nearby,’ came to mind, and quickly after that, the entire passage that tells of Jesus’ birth just unfolded from memory.  I was surprised because I have never consciously tried to memorize this passage.  If I had, I would likely fail.   Memorizing has never been easy for me!  But maybe because I have heard and read this story so many times, there it was…in my heart.

Talking to myself, with you listening in, I have covered some ground about lots of things that Christmas isn’t…not the decorations, or how many cards I send, or how I dress or what I bake (hooray!) or the gifts I give.  Wrapping up Christmas is a heart thing, a perspective that rises above my surroundings and yours.  Step back with me to the first Christmas, and to those unwashed, socially unwelcomed shepherds.

The angels left and went into heaven. Then the shepherds said to one another, “Let’s go to Bethlehem. Let’s see this thing that has happened, which the Lord has told us about.”

So they hurried off and found Mary and Joseph and the baby. The baby was lying in the manger. After the shepherds had seen him, they told everyone. They reported what the angel had said about this child. All who heard it were amazed at what the shepherds said to them. Luke 2:15-18

Did you get that?  The shepherds hurried off and found Mary and Joseph and the baby!  About the last people on the planet people would expect to greet the Son of God, were the ones that heard the news!  If, in my efforts to finalize my Christmas prep, I hurry, then I want to focus on making it a ‘hurry to see’ this One who was sent into the world as Light and Love.

And that’s a wrap!  Merry Christmas!

Wife, Mom, and Grandmother, a.k.a. Nonnie...those are my favorite hats! After several wonderful lives as a teacher, an Army wife, and a children's minister, I am now stretching my writing wings, that have been tucked away too long. View all posts by connieplummer53